KT Moller commenced furniture removals in 1968 in Sydney with an old Bedford truck. After relocating to Brisbane in 1974, household removals between Brisbane and Darwin kept the wheels turning for a number of years. Cyclone Tracy resulted in trucks in that part of Australia being kept very busy. In 1986 our focus shifted to WA and Perth in particular. A regular road service between Brisbane and Perth was established with occasional to remote areas. In 1997 furniture removals using 20′ shipping containers conveyed across the Nullarbor by train began. Today we operate rail services between Brisbane and Perth several times each week. Additionally, we have a regular road service which does a large circle around Australia. Leaving Brisbane every fourth Friday it heads across the Nullarbor towards Perth, then up through Geraldton, Carnarvon, Karratha, Hedland, Broome, Derby, Fitzroy Crossing, Halls Creek, Kununurra, Katherine, Threeways, Mt Isa, Cairns, Townsville and then all towns to Brisbane. 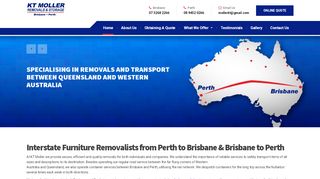