Over the past 5 years, we have established ourselves as one of Australia’s leading renewable energy providers. In 2016, GEM Energy installed the first Tesla Powerpack Battery System in an Australian school; a system that led to a 70% reduction in the boarding schools’ power bills. On the back of this industry-leading project, we were selected to roll out solar PV and battery systems for dozens of schools throughout Queensland. In the same year, we were also named as the top solar energy installer in the country by our peak industry body, the Clean Energy Council (CEC) in the 100kW+ and Battery Back Up categories. 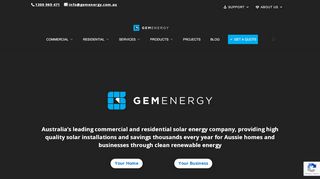